When I was contacted in May last year by Jacinta and Caz regarding their civil union in December, I was very excited. They are a lovely couple who live in Australia who wanted to take their relationship to the next level. Then, on 19 August 2013 same sex marriage became legal in New Zealand and Jacinta and Caz’s plans changed a little. Now they could get married!!
It was a day of celebration, love, fun, laughter, commitment and so much more.

Today I received this wonderful message, photo and a link to a YouTube film about marriage equality in which I feature… check it out!

We had an amazing time in NZ….you were the perfect celebrant for us and helped make our ceremony very special. We have attached a couple of photos for you and a link to the YouTube film that Lou has posted about marriage equality…….you will notice that you feature in it. 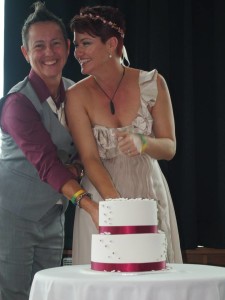 Auckland couple Mel and Greg chose to elope to Queenstown.